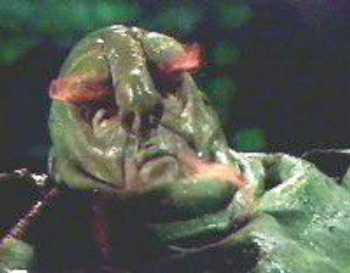 I 'was' employed by the Galactic Hyperspace Planning Council until I came to this miserable little planet.

My career was going well, demolishing asteroids, moons, planets and other insignificant space garbage to make way for this new Hyperspatial Bypass, until I came to this system. All I had to do was demolish a planet called 'Earth', how was I supposed to know it had been commissioned by the Mice to find the ultimate question of Life, the Universe and everything. its just a job to me.

Well the Mice complained to the Galactic Hyperspace Planning Council, I lost my job and they banished me to obscurity on this arm-pit of a planet.

I tried to earn a living by writing beautiful Vogon poetry but got rejected by almost everyone I read it to. I have learned that 'Club Bouncer' could be a good career path for an Earth-bound Vogon - any offers ?

So here I am, stuck here on this silly little 'planet', testing this web site - yup it works, can I go home now ??

I'll tell you something else that really annoys me, that bloody hitch-hikers guide describes Vogons as one of the most unpleasant races in the galaxy, not actually evil, but bad-tempered, bureaucratic, officious and callous, and having as much sex appeal as a road accident as well as being the authors of the third worst poetry in the entire universe.

We are often employed as the galactic government's bureaucrats and have had many job offers from planet Earth - pity we destroyed it.

All because I wouldn't lift a finger to save my grandmothers from the Ravenous Bugblatter Beast of Traal without orders (respect the chain of command), signed in triplicate (obviously), queried (there a slight spelling mistake). The best way to get a drink from us Vogons is to buy it yourself - mine is a Pan Galactic Gargle Blaster, thanks.